(the most wonderful place on Samos!)

2 Danish travel agencies (Spies & Skibby Rejser) have 'only' Pythagorion on their Samos program, but both of them use pictures from Kokkari in their marketing of Pythagorion.
It is in their catalogues and on their websites as well. I wonder if it is a coincident, that they also are using the same pictures!!  I agree with them - Kokkari is wonderful !

(and they do it well)

Like the 2 Danish agencies Ving 'only' have Pythagorion on their program, but look at the top of their Pythagorion page - where are the pictures from ?? Yes - from KOKKARI !

Both pictures shows the harbour promenade in Kokkari.

The text: 'Pythagorion- "tourist capital" with a smell of jasmine. A beautiful pearl with many possibilities for own trips and experiences. Here stays Ving's most satisfied Greece-guests.' ( Where are they staying ? In Kokkari or Pythagorion??? )

Ving's catalogue isn't better than the Danish agencies catalogues. A picture from the western beach in Kokkari is called 'The beach in Pythagorion' (page 166), and from hotel Damo in Pythagorion it should be possible to look all the way to the harbour promenade in Kokkari (page 168).

seen from the harbour in ... Kokkari !

They are using another picture - from Kokkari !!

(The picture in the middle is from the harbour in Kokkari.)

Changes made - Now Ving is using a big picture from KOKKARI !! 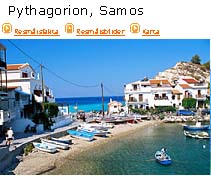 Both advertising for Pythagorion with these pictures:

From the harbour in kokkari  &  Gangou Beach by Samos town.

destination is the SOUTH-side ??  Hopefully they send their guests to the

Falk Lauritsen Rejser has travels to Samos town and Pythagorion.
On their web (catalogue) they tell about those two places, BUT
3 out of 6 pictures are from the KOKKARI area !

(Reply: They were busy, and had not time to answer mails.

Suggested to contact them by phone - will NOT be done ! )

It is a little strange, that all these agencies who obviously find Kokkari very attractive don't sell travels to that place.

If you have some 'funny Samos stuff'  (story or pictures) you want toshare with others, then send us a mail, and we will put it on this page.